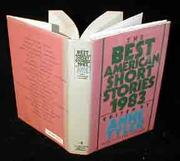 For 1982, Wright Morris' "Victrola"—a Chekhovian tale of man-dog attachment—was clearly the story of the year: it was the standout of William Abrahams' strong O. Henry Award collection (p. 191)—and it's certainly the standout of this less impressive gathering by novelist Tyler, 1983's guest-editor for the Best American Short Stories series. While less idiosyncratic than some previous guest-editors, Tyler's obvious preference for realistic domestic situations—mildly quirky, mostly non-urban, usually more than a bit sentimental—results in an anthology without much variety; you'll find nothing very stylish, very comic, very adventurous or disturbing here. Bobbie Ann Mason's "Graveyard Day," also a highlight of 1983's Pushcart Prize collection, is by far the best in this dominant vein: one of her fine, offhand portraits of ordinary people (a divorced mother on a graveyard picnic with daughter and beau) achieving some grace in lives defined by TV and fast-foods—a Middle America viewed with precision but no condescension. Engaging, too, are slightly offbeat sketches by Julie Schumacher (a super-competent mother's near-magical approach to her own illness) and Louise Erdrich (an outsider's wry view of the marriage between an Indian man and a huge truck-weigher). And there are solid, surprise-less New Yorker stories on marriage, divorce, and kids—with John Updike deftly getting some extra texture by counterpointing divorce with the "Deaths of Distant Friends." Only Ursula Le Guin, however, offers a little daring: her neat, deadpan "Sur" posits an all-female Antarctic expedition that predated Amundsen. Only Laurie Colwin tries, with semi-success, to create a real voice: a middle-aged man complaining—with some sex-role reversals and some affecting moments—about "My Mistress." And this otherwise sound-and-pleasant collection is marred by the inclusion of one truly ghastly item: "The Count and the Princess" by Joseph Epstein—an obvious, plastic, corny tale of odd-couple romance (a European count, a Jewish divorcee) that seems more like a TV-sitcom pilot than a serious short story. (Even Tyler's gushing, story-by-story introduction, which reads like a medley of her many book-ad blurbs, can't work up much genuine enthusiasm for this entry.) Still—one of the better post-Foley anthologies, with few risks and few inspired moments, but also with few pretensions or embarrassments.