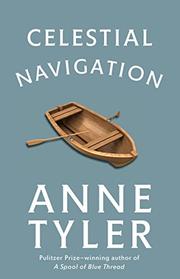 Miss Tyler's family webs which vibrate with the slightest whisper usually take place in crumbling frame houses, all with that faint sweet odor of failure, roaches and dusty vestibules. Such as the Baltimore boarding house owned by the recently deceased Mrs. Pauling and her artist son, 38 year-old Jeremy, a recluse. Cocoon-raised Jeremy is in that soft, vulnerable, pupal stage of arrest where, oddly enough, one may be a very good artist. He makes pictures, declares Miss Vinton, a crusty spinster boarder, "the way other men make maps — setting down the few fixed points that he knows (to) guide him. . . through this unfamiliar planet." Among the other roomers is Mary Tell, with her child, runaway from a young marriage and skittish lover, penniless and lonesome. She is then abruptly receptive to a marriage arrangement (her husband refuses divorce) with Jeremy. "Something new" is the uniting hope for both which leads Jeremy to a fresh and stable dependence, Mary to happy child-bearing. But "they might have been taking two separate rides." Mary's woman's world is entire and complete but Jeremy still navigates by invisible stars. Mary leaves and finally Jeremy makes his one heroic try at doing what he believes fathers and husbands are supposed to do (repair houses, take children on outings). But, rejected, he returns to his house and old age, with Miss Vinton, the other "clay duck." Miss Tyler has trouble with Jeremy — he represents more than he is which is rather a dodo. But her decaying hermitages still stimulate and entrap.