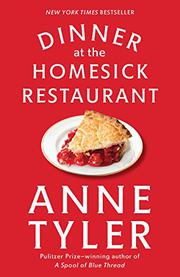 DINNER AT THE HOMESICK RESTAURANT

Another of Tyler's family portraits: again she draws forth that elusive aura of redemptive family unity—despite snapped loyalties, devastating loneliness, and the conflicts between those who hit life hard and those who "live life at a slant." Ezra Tull—one of Tyler's gentle, bumbling men—is, unlike his meddlesome, reproachful mother Pearl, a "feeder." And at his "Homesick Restaurant," an untidy establishment where he'll solicitously "cook what other people felt homesick for," Ezra sometimes hopefully sets a table for family occasions. But "the family as a whole never yet finished one of his dinners—it was as if what they couldn't get right they had to keep returning to." The family, you see, has never been "right" since that day years before when Pearl's husband Beck left them for good: overburdened with the raising of three young children, lonely and friendless, Pearl became an angry sort of mother to them all, raising them each with a "trademark flaw." Older brother Cody is handsome, bland, a prankster who hides the unloved rage of an unfavorite son—and this drives him to steal Ezra's fiancé Ruth for his own wife. Sister Jenny, deserted by her second husband, given to child abuse, hurt and overworked, is rescued by the family. Gentle Ezra is stuck with mother Pearl—though he comes to see "her true interior self, still enormous, larger than life, powerful. Overwhelming." And when Cody's teenage son Luke hitchhikes, on the crest of one of Cody's pristine rages, from the Virginia home to Ezra in Baltimore, he too is inundated with family miseries. Finally, then, Pearl dies and the family will gather again at the restaurant. But this time they'll be joined by the near-mythical old Beck Tull: can he now ever be part of the family? Well, perhaps—because a life's anger seems to drain as Cody sees all his family "opening like a fan," drawing him in—and Beck, an old man who could not, long ago, take the "tangles" of family, will stay "until the dessert wine." Less magical, perhaps, than other Tylers—but her vision of saving interdependencies and time's witchiness continues to tease and enchant.