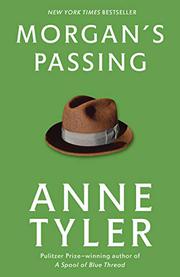 You could say Morgan was a man who'd gone to pieces. . . maybe he'd arrived unassembled." Yes, this is the odyssey of fortyish Morgan Gower—and in the soft muddle of Morgan's familial netting and his calls to freedom, Tyler again finds both warmth and a certain hard coherence. Manager (in name only) of a run-down hardware store and trapped within his Baltimore household web—cheerfully sloppy wife Bonnie, seven industriously dull daughters, a senile mother, an addled sister—Morgan buzzes noisily but to little effect. He's not a "temperate person." He dribbles ashes, fiddles with his beard, and scatters himself through half-baked projects, varied identities, assorted wardrobes. But then Morgan enters the lives of young puppeteers Emily and Leon Meredith: he first meets them when there's a call for "a doctor in the house"—and Morgan pops up to deliver Emily's baby daughter on the spot, posing as "Dr. Morgan." And a year later, his home life withering, Morgan begins to spy, fascinated, on the Merediths, envying their "austerity, certitude, their mapped and charted lives." Then, in an antic confrontation, "Dr. Morgan" confesses his impersonation, but Emily understands "he has to get out of his life sometimes," and soon Morgan's love for Emily blinks on like a desert sunrise. Will romance bloom? Yes, eventually. Emily (product of a stifling past) begins to find Leon too rigid and buttoned-in, an affair commences, Emily becomes pregnant, Morgan elatedly arranges their respective separations from spouses—and the two leave Baltimore with baby and puppets, Morgan taking the name of Meredith. As far as wife Bonnie is concerned (and hence the title) Morgan has "passed on" from his real self—she places a maliciously playful obituary in the local paper. But Morgan can only, in a final summing-up, feel sure that "it matters who you love and why." The Tyler trademarks—surface warmth and humor with a cutting undertow—again on impressive, irresistible display.