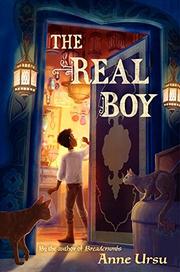 An isolated, insecure orphan living in magical Aletheia becomes a “real boy” when his ordered world crumbles and he must rely on himself.

Since coming to the Barrow, 11-year-old, autistic Oscar has lived in magician Caleb’s cellar, where he performs menial tasks preparing herbs. The Barrow encircles a shining, walled town whose privileged residents depend on the Barrow’s magic smiths to supply them with protective potions, salves, charms and spells. Clueless about people, Oscar loves plants, including the wizard trees that infuse the Barrow’s soil with magic. When urgent business takes Caleb away, his apprentice is murdered, and Oscar must run Caleb’s shop. Lacking social skills, Oscar longs to fold “up, like an envelope,” but he manages the shop with help from a kindhearted girl who befriends him. Suddenly, more terrible things happen: Children begin to ail, wizard trees are felled, and a sinister creature kills Caleb and threatens the Barrow. Determined to find why magic no longer protects everyone and burdened with many characteristics of autism, the unlikely Oscar realizes it’s up to him. Incorporating fairy-tale elements, Oscar’s story unfolds slowly as he overcomes his phobias and discovers that friendship trumps magic any day. Black-and-white illustrations capture story highlights.

A good pick for fairy-tale fans, especially those battling their own fears.