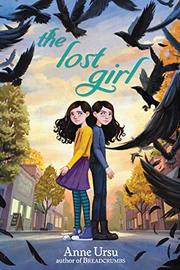 How will identical twins survive separation for the first time, especially when there’s a monster in their Minneapolis neighborhood?

Fifth grade is full of big changes for white identical twins Iris and Lark when they discover they will not only have different teachers, but different after-school activities. A third-person—although not omniscient—narrator recounts the twins’ story. Identifying this narrator is the start of many mysteries. And although the plot revolves around the girls’ burgeoning independence, Ursu focuses most on the separation’s effect on Iris. Having watched her sister face multiple illnesses, she’s become Lark’s protector and remains reluctant to give up this role. Grounded in spot-on twin truths, the mysterious story is also a modern-day fantasy with myriad components: local art heists and an antiques store with cryptic signs; the store owner’s magical experiments and missing sister; Lark’s own missing items and fondness for crows; Iris’ Pied Piper dreams and folktale musings; Iris’ after-school program at the library and its diverse group of girls, who explore self-esteem and feminism. The details are astounding, but the overall effect is overly ambitious. When the monster finally appears, the finale feels rushed as the girls work to defeat him. But the process allows the twins to realize that growing up doesn’t mean growing apart. Charming illustrations throughout reflect both the girls’ subtle physical differences and larger adventures.

Ursu’s fans will find much to love.