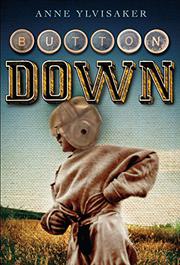 Ylvisaker (The Luck of the Buttons, 2011) returns to the lovably unlucky Button family, this time with a gentle story about 11-year-old Ned and his love of football.

When local legend-in-the-making Lester Ward goes off to play football for the University of Iowa, he tosses his old football into an eager pack of boys, and surprise of surprises, it is caught by scrawny Ned Button. But when Lester’s younger brother Burton steals the ball away, Ned and his friends are ostracized and reduced to playing with a newspaper-and-twine football on the sidelines. That is, until Granddaddy Ike gets involved. He convinces the group of ragtag youth that football is more about strategy than size, teaching them plays to run against the bigger, tougher boys. And despite a failing heart, Granddaddy arranges to make one of Ned’s dreams—attending a game at the University of Iowa—come true. The precise historical setting—tiny Goodhue, Iowa, in 1929—is not central to this story, though it's carefully drawn. It could happen anyplace where bullies do nothing worse than steal footballs and a grandfather’s advice and love are enough to make a kid feel like he can take on the world.

Short chapters, simple yet meticulous language, a wholesome feel and the universal story of a boy with a dream combine to give this one widespread appeal.