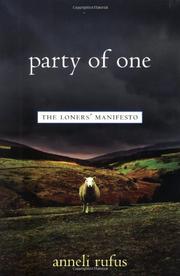 A witty essay about things best done on your own by admitted loner Rufus.

Editor (presumably in splendid solitude) of the literary quarterly East Bay Express, our Lone Writer finds the conviviality of the wide world one huge pain and would like to not be considered nuts just because solitude and a room of her own speak to her soul. (Her loyal husband agrees.) Rufus discusses with brio the rewards of the sequestered life and the bothers imposed by gregarious outsiders in various sociological contexts. In film, lone heroes like Shane are overtaken by lone killers like Norman Bates. By the way, if popular culture is so popular, what has it to do with an anchorite beyond offering information as what the crowd is up to? Advertising, the ubiquitous power behind pop culture, reveals what everyone else will want, so who wants it? Not the true recluse. Don’t misjudge: loners have real friends, though perhaps not a lot and maybe they don’t visit frequently. And they have sex, too, though perhaps not a lot or frequently. Organized religion is a problem (it’s organized, after all), but the Internet is a stroke of luck. Solo adventure is a cinch, and so is eccentricity. Loners flourish in the creative arts and science. Emily Dickinson and Albert Einstein, Thomas Merton and Greta Garbo are among the many insular folks examined, along with Unabomber Theodore Kaczynski and the D.C. snipers (losers misidentified as loners by the media). Sam Spade, Batman (but not Robin), and the author are simply reclusive, preferring independence to society. “Is socializing all that great?” asks Rufus. “Riots are socializing.” Proceeding on the perhaps questionable assumption that loners are universally reviled, she provides a founding manifesto for an organization of self-contained people. (There would, naturally, be no meetings.) Or maybe it’s a book discussion topic for eremitic groups: join the stay-at-home crowd and read it alone.

A clever and spirited defense, perhaps more energetic than the actual amount of prejudice requires.