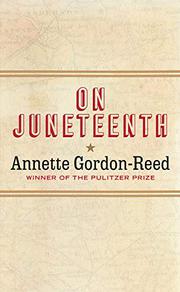 The Harvard historian and Texas native demonstrates what the holiday means to her and to the rest of the nation.

Initially celebrated primarily by Black Texans, Juneteenth refers to June 19, 1865, when a Union general arrived in Galveston to proclaim the end of slavery with the defeat of the Confederacy. If only history were that simple. In her latest, Gordon-Reed, winner of the Pulitzer Prize, National Book Award, Anisfield-Wolf Book Award, and numerous other honors, describes how Whites raged and committed violence against celebratory Blacks as racism in Texas and across the country continued to spread through segregation, Jim Crow laws, and separate-but-equal rationalizations. As Gordon-Reed amply shows in this smooth combination of memoir, essay, and history, such racism is by no means a thing of the past, even as Juneteenth has come to be celebrated by all of Texas and throughout the U.S. The Galveston announcement, notes the author, came well after the Emancipation Proclamation but before the ratification of the 13th Amendment. Though Gordon-Reed writes fondly of her native state, especially the strong familial ties and sense of community, she acknowledges her challenges as a woman of color in a state where “the image of Texas has a gender and a race: “Texas is a White man.” The author astutely explores “what that means for everyone who lives in Texas and is not a White man.” With all of its diversity and geographic expanse, Texas also has a singular history—as part of Mexico, as its own republic from 1836 to 1846, and as a place that “has connections to people of African descent that go back centuries.” All of this provides context for the uniqueness of this historical moment, which Gordon-Reed explores with her characteristic rigor and insight.

A concise personal and scholarly history that avoids academic jargon as it illuminates emotional truths.