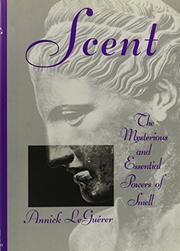  A fascinating tour of the olfactory world and what it has meant to humanity. Le GuÇrer, a French scholar, offers a mostly pleasant Gallic stroll through the history of scent, full of interesting observations. She investigates scent in relation to magic, mummies, sex, discrimination, ritual, and medicine--with plenty of quotes from the great thinkers. Religious aspects of odor are duly discussed, from the ``odor of sanctity'' released by St. ThÇräse's body after death to the sinister aroma secreted by the witches of Loudon--but it's science that brings out Le GuÇrer's rapier. As Freud observes that civilization is connected with a decline in the importance of smell, his friend Fleiss is obsessed with a connection between sex and the ``vomeronasal organ''--an idea reminiscent of Descartes' notion that the pineal gland connected body and soul. To Le GuÇrer, science is a bumbler--officious, often mistaken, and a fair target for her lethal irony: The French, smarting from the War of 1870, became obsessed with the ``German smell,'' which they connected, through ``research,'' with supposed German dietary habits--gorging followed by massive defecation. One German soldier was reported ``distended and swollen to death'' after eating an enormous quantity of lard. Proust, Fourier, Diderot, HelvÇtius, Aristotle, Paracelsus, etc.--all take their turns here as Le GuÇrer quietly builds a convincing case that the generally neglected olfactory sense has had an inherent interest and power for many of the livelier and more creative members of our species. Throughout runs a thread of regret for the loss of that earlier, more animalistic and magical world in which scent was routinely employed to seduce, cure, and cast spells, and was central to existence. Refreshing, civilized, very French.