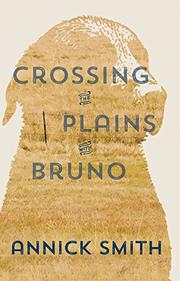 CROSSING THE PLAINS WITH BRUNO

Exploring the Midwest, the past, and the passing of time on a road trip with a chocolate Lab named Bruno.

A two-week solo road trip across the Great Plains is a journey that can be approached in two different ways: as an unsavory, short-as-possible trek of necessity or as an opportunity that provides miles of uninterrupted reverie, a chance for the mind to luxuriate in all manner of memories. For writer and filmmaker Smith (In This We Are Native, 2002, etc.), a founding board member of the Sundance Institute, it was more the latter that appealed to her, with one minor change: her traveling companion, Bruno. In the preface, the author discusses the losses that followed her journey. While still reworking the book, Bruno became ill, and the veterinarian was unable to save him; Smith’s mother, the lodestar of the story in ways both physical (she was going to help her mother with moving) and spiritual, passed away. Furthermore, the start of her trip occurred in the same month as the anniversary of the death of Smith’s husband. Before embarking, the author entered the date, mileage, and time of departure in her journal. Then the numbers mostly faded into the background. She holds her life and the choices made—by her and for her—up to the light cast by her relationships with friends and family. She also tenderly shares the details of some of the losses in her life and examines what happens to hopes when they are fulfilled differently than one might expect and when the person doing the hoping finds herself looking backward to find her way forward. “One twist of the kaleidoscope at memory’s core causes the shards to fragment and re-pattern,” writes the author, “but they are always the same shards.”

Bruno is a silent partner, often unmentioned for pages at a time, but Smith relates their experiences in a deliberate, thoughtful way.