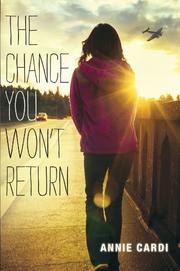 THE CHANCE YOU WON'T RETURN

Cardi delves into issues of love, acceptance, loss and identity in her engaging debut novel.

High school junior Alex Winchester is a pretty typical teenager. She fights with her mom, is annoyed by her baby brother and expects her younger sister to keep her secrets. Alex does have some problems, such as a paralyzing fear of driving. And she has been noticing an alarming change in her mom’s behavior, which manifests as a delusional disorder. Mrs. Winchester begins to believe that she is the long-missing, presumed-dead aviatrix Amelia Earhart. After a brief hospitalization, Mrs. Winchester returns home with her delusion intact and treats Alex as one of her fellow female aviators. Alex attempts to adapt to her new role as Amelia’s friend as she tries to keep her new reality a secret from her friends and classmates, as well as her new boyfriend, senior Jim Wiley. The author creates nuanced characters and presents them with their flaws and strengths intact, including a character with a mental disorder who never loses her humanity or becomes a caricature. Readers seeking yet another teen problem novel with an unrealistically positive ending should look elsewhere. This novel delivers something far more rare: a well-written, first-person narrative about negotiating life’s curve balls that has a realistic ending.