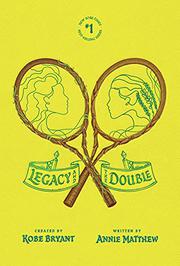 LEGACY AND THE DOUBLE

From the Legacy series, volume 2

A young tennis champion becomes the target of revenge.

In this sequel to Legacy and the Queen (2019), Legacy Petrin and her friends Javi and Pippa have returned to Legacy’s home province and the orphanage run by her father. With her friends’ help, she is in training to defend her championship when they discover that another player, operating under the protection of High Consul Silla, is presenting herself as Legacy. She is so convincing that the real Legacy is accused of being an imitation. False Legacy has become a hero to the masses, further strengthening Silla’s hold, and it becomes imperative to uncover and defeat her. If Legacy is to win again, she must play her imposter while disguised as someone else. Winning at tennis is not just about money and fame, but resisting Silla’s plans to send more young people into brutal mines with little hope of better lives. Legacy will have to overcome her fears and find the magic that allowed her to claim victory in the past. This story, with its elements of sports, fantasy, and social consciousness that highlight tensions between the powerful and those they prey upon, successfully continues the series conceived by late basketball superstar Bryant. As before, the tennis matches are depicted with pace and spirit. Legacy and Javi have brown skin; most other characters default to White.

A worthy combination of athletic action, the virtues of inner strength, and the importance of friendship.