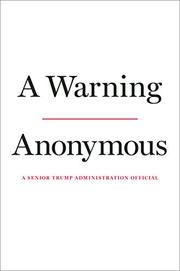 The nameless resister inside the White House speaks.

“The character of one man has widened the chasms of American political division,” writes Anonymous. Indeed. The Trump years will not be remembered well—not by voters, not by history since the man in charge “couldn’t focus on governing, and he was prone to abuses of power, from ill-conceived schemes to punish his political rivals to a propensity for undermining vital American institutions.” Given all that, writes the author, and given Trump’s bizarre behavior and well-known grudges—e.g., he ordered that federal flags be raised to full staff only a day after John McCain died, an act that insiders warned him would be construed as petty—it was only patriotic to try to save the country from the man even as the resistance movement within the West Wing simultaneously tried to save Trump’s presidency. However, that they tried did not mean they succeeded: The warning of the title consists in large part of an extended observation that Trump has removed the very people most capable of guiding him to correct action, and the “reasonable professionals” are becoming ever fewer in the absence of John Kelly and others. So unwilling are those professionals to taint their reputations by serving Trump, in fact, that many critical government posts are filled by “acting” secretaries, directors, and so forth. And those insiders abetting Trump are shrinking in number even as Trump stumbles from point to point, declaring victory over the Islamic State group (“People are going to fucking die because of this,” said one top aide) and denouncing the legitimacy of the process that is now grinding toward impeachment. However, writes the author, removal from office is not the answer, not least because Trump may not leave without trying to stir up a civil war. Voting him out is the only solution, writes Anonymous; meanwhile, we’re stuck with a president whose acts, by the resisters’ reckoning, are equal parts stupid, illegal, or impossible to enact.

Readers would do well to heed the dark warning that this book conveys.