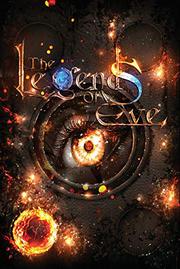 THE LEGENDS OF EVE

In this second installment of a YA series, a group of students still mastering magic will have to confront a Shadow Army that’s intent on obliterating the world of Gaia.

Teenage siblings S’rae and Vayp are at odds, stemming from events in the preceding fantasy novel. In fact, each is determined to murder the other. In Vayp’s case, he believes killing S’rae will bring back his dead Sol Mastery—an animal who deeply links to a particular human. Gabrael, the God of Fire and King of Gods, knows a world-destroying Shadow Army has risen. Only fire can kill the Shadows. As Headmaster of Harahm’de, the School of Fire, Gabrael enlists his son, Retro’ku, to train others in the fiery craft. Meanwhile, to fulfill part of her destiny, S’rae attends GroundStone, the School of Earth and Rock, to retrieve the Earth orb via an arena challenge. She faces many obstacles, most notably that she’s the only person she knows who’s never connected to a Sol. But S’rae soon realizes that someone is trying to kill her. In a concurrent story set in the past, Destrou, “the Boy Who Never Lived,” endures a challenge of his own. But his tale, which Vayp is reading in the Book of Eve, ultimately ties to one of the siblings. Anonymous’ (A Warrior’s Past, 2019) sequel, which is consistent in tone and pace with the series opener, deftly propels character development. S’rae, for example, learns she may have a special Sol different from the others. She’s the most engaging character in this book, as her story is more diverting than Destrou’s somber account. That’s primarily due to a lighthearted teen romance: She literally drools over Retro’ku but also finds herself attracted to GroundStone’s new male professor (who’s only a few years older than she is). Each chapter opens with RyKyArt’s (A Warrior’s Past, 2019) rich artwork that’s specific to the character, like icy blue for Destrou and sunset orange for S’rae. The novel does run a bit long (over 450 pages). The inevitable battle with the Shadow Army is rousing but merely a small part of the narrative. Nevertheless, as in the earlier installment, some plotlines conclude with occasional surprises while the ending smoothly sets up another volume.

A lengthy but entertaining entry in an evolving fantasy saga.