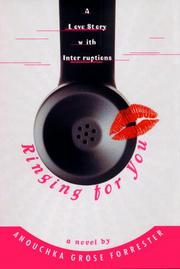 A witty transatlantic debut about the perils of a bright young woman trapped behind a switchboard at one of London’s more demented City offices. The take-this-job-and-shove-it genre is a favorite among young writers for a simple reason: Most have to pay the bills in some dreadful fashion during the long gray dawn before they are ever published. Forrester’s heroine, however, finishes her novel while she works a dreadful day job. Her novel is a journal really, though she can—t quite put everything into it. Especially names. Like her own, for starters, and that of her boyfriend (who forbids her to mention him and is only referred to as the Man Who Mustn—t be Mentioned, or MWMM). And she must mind what she says about the office itself; her father assures her that libel laws are quite strict in Britain. Although her real interest is literature, The Academy of Material Science in London hired her as a receptionist fresh out of university, and she does manage to get quite a bit of writing done at her desk despite the constant ringing of the phone and the endless parade of messengers dropping off packages. But she has little faith in herself, either as a writer or a person——I ought to be able to transform my misery into something else through writing, but instead I just write about it and it stays the same——and most of the time her affair with the MWMM seems as pointless to her as her manuscript does. Is she deluded? Or just inexperienced? Eventually, she concludes that “the beginning of love is a story, the end of love is a story, but before the end the middle might mean anything.” Something plenty of married couples and successful authors take a lifetime to discover. Candid, fresh, and likable: Forrester’s naturalistic tone and elegant voice more than compensate for her slightly—and endearingly—aimless narrative.