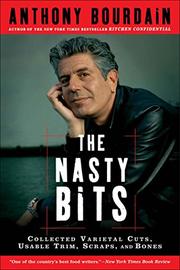 The globetrotting, guerrilla TV chef of ill repute serves up some journalistic odds and ends.

A garrulous, sublimely talented chap with an eminently respectable couple of New York brasseries and a load of opinions to spare, Bourdain (A Cook’s Tour, 2001, etc.) remains an anomaly in the Food Network era. Instead of running a chain of big-ticket, big-ego eateries, he roams the world consuming massive quantities of strange food and prodigious drink, adding snarky commentary and turning it all into a TV show of sorts. Along the way, he writes for several publications, from Gourmet to the Los Angeles Times; a good selection of those writings are collected here. Subjects include other celebrity chefs (Rocco DiSpirito “messed with the bitch goddess celebrity and got burned”), the best bars for adrenaline-jacked kitchen crews to get hammered in the wee hours (in Chicago, it’s Matchbox) and the proper definition of cooking (“a cult of pain”); somehow it all flows together with nary a seam in view. But there is some repetition and, unlike most writers with an edge, he's better at being nice. Scourging attacks sometimes fall flat for lack of variety, while puff pieces offer the finest examples of foodie enthusiasm. Indulging in Masa Takayama's insanely expensive sushi is “like having sex with two five-thousand-dollar-a-night escorts at the same time—while driving an Aston Martin.” The unfathomable wizardry of Spain’s mad-chef genius Ferran Adria is “hugely enjoyable, challenging to the world order, innovative, revolutionary.”

A vibrant discourse on satisfying hungers of every kind.