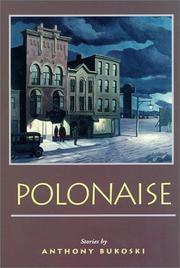 The twelve stories in Bukoski’s (Children of Strangers, 1993, etc.) third collection portray life among the Polish-Americans of Superior, Wisconsin. Anyone who’s ever driven through the Midwest and noticed how polkas supplant country & western music on the car radio once you get near the old industrial towns of the Great Lakes will wonder why there isn—t more fiction like Bukoski’s. All of his characters are immigrants or the children of immigrants, most with a living memory of the Old Country, and each seems adept at the art of confession. The narrator of “Pesthouse,” for example, recalls her merchant seaman father’s long absence during WWII and his increasingly unbalanced obsession with Jews as the source of her scarlet fever shortly after his return. “The Absolution of Hedda Borski” is a dying woman’s account of her taking in an abandoned child to compensate for the miscarriage she suffered as a young woman. “The World at War” describes the generational conflict between Antek Drabowski and his son Eddie: Antek, who served in the Coast Guard during WWII, disapproves of his son’s involvement in the “police action” of Vietnam. “Bird of Passage” is a comic tale of an elderly widower’s attempts to find a new wife (—He feared, when he assumed the “male-dominant position,” that his upper plate might fall out on her despite the Poli-Grip—). The collection’s best piece, though, is “The Tools of Ignorance,” the bittersweet memoirs of Augie (the “Kielbasa Kid—) Wyzinski. Now a bartender at the aptly named Heartbreak Hotel, Augie started out as a ballplayer for local teams and was eventually signed up by the San Francisco Giants, only to end washing out in the minor leagues. Elegiac and restrained, the piece sets the tone for the entire volume. Nicely paced, vivid, and almost obsessive in its attention to a specific locale: Bukoski’s work opens up a world that deserves more spectators.