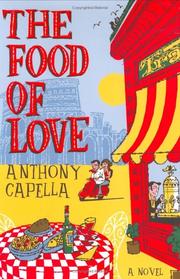 THE FOOD OF LOVE

A Cyrano de Bergerac first novel about a shy Roman chef who helps one of his waiters seduce an American coed with the perfect meal.

At 22, Laura Patterson is a bit more sophisticated and serious than the typical junior-year-abroader, and at the Anglo-American University in Rome (whose students tend to hang out in Irish bars and complain about Italian pizza), she stands out. For one thing, Laura actually has Italian friends, who have dutifully taught her not to order cappuccino in the afternoon and never to wear sneakers in public. So for Tomasso Masi, who has made a career of seducing tourists, Laura is a rare prize: a blond American who walks into his neighborhood bar and can speak (and swear) in Roman slang. Tomasso is a waiter at Templi, a restaurant so rarefied that you need to make reservations three months in advance, but he tells Laura that he’s a chef in order to lure her to his apartment for dinner and whatever else might follow. Fortunately for Tomasso, his roommate Bruno is a chef—at Templi—and the meal he concocts (and Tomasso passes off as his own) removes any qualms Laura may have had about spending the night. Tomasso is very happy, but the problem is that Laura has fallen in love as much with Bruno’s cooking as with Tomasso himself. So for several months Bruno goes along with the charade, secretly preparing meals and slipping out just before Laura arrives. Why such magnanimity? Mainly because Bruno (who has never had a girlfriend in his life) has secretly fallen in love with Laura himself. Will he ever let on? Cyrano, you remember, very nearly took the secret to his grave—but he wasn’t an Italian.

A nice romp through the back alleys of the Eternal City, all in a lighthearted tone more farce than tragedy.