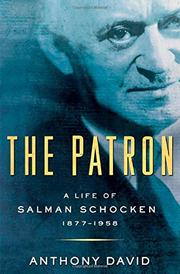 A well-rendered life of the philanthropist, activist, autodidact, and publisher who acted as an important gatekeeper and advocate of European Jewish culture through much of the last century.

Now an “infrequent footnote in scholarly monographs dealing with the history of German Jews,” as David (Gershom Scholem: A Life in Letters, not reviewed) puts it, Salman Schocken (1877–1959) was a barely educated Ostjuden, or Eastern Jew, from Poland who made his way westward, fell under the spell of Nietzsche and other German writers and thinkers, and evolved into a “mystical merchant” (the phrase is Gershom Scholem’s) who built a small empire of department stores and other businesses while reading just about every book ever written. This was just the sort of career trajectory that some German Jews—and, of course, many Germans—feared, and Schocken battled plenty of resentments and prejudices as he earned his fortune, all of which may have helped push him into the Zionist camp early on. Schocken—who altered his name to the modern, businesslike “S. Schocken Jr.” about the time he established himself in Berlin—had a mistrust for organized politics and society, but he became a stalwart of Zionist culture-building. Working with the likes of Scholem, Martin Buber, S.Y. Agnon, Max Brod (and through him Franz Kafka), and other writers, Schocken became a publisher and patron; in him, in David’s words, “the Jewish renaissance found its Medici.” A bibliophile who considered his 30,000-volume library to be his autobiography, Schocken was forced out of Germany after Hitler’s rise to power, though he managed to move much of his inventory to Palestine after hard bargaining with the Nazi authorities. A modern nomad, he wandered between Jerusalem and New York (where he founded the publishing company that bears his name today), adding Switzerland, Italy, and other European ports of call after the war, and contributing to that renaissance for the rest of his life, as his descendants continue to do today.

A thoughtful, well-written memorial to an important but overlooked figure in modern Jewish letters—and a real treat for bibliophiles.