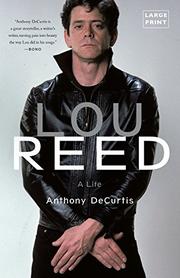 Rolling Stone contributing editor DeCurtis (Creative Writing/Univ. of Pennsylvania; In Other Words: Artists Talk About Life and Work, 2005, etc.), who followed Reed’s career closely over the years, claims to be one of the few rock writers Reed respected. Focusing on the music as much as the singer’s often dissolute lifestyle and controversial opinions, the author makes a good case for Reed’s lasting significance. Born in Brooklyn, he moved with his middle-class Jewish family to Long Island when he was a young boy. A rebellious teenager, he began playing in bands early on. At Syracuse University, he came under the influence of the poet Delmore Schwartz, who encouraged him to take writing seriously—and served as a model of the bohemian lifestyle. Moving to New York City, he soon joined up with the future members of the Velvet Underground, who gained cachet by being “adopted” by Andy Warhol. But the band set another pattern that would dominate Reed’s career: an inability to share credit. Singer Nico, installed by Warhol to give the band glamour, and John Cale, who co-wrote many of the band’s songs, were both bones of contention. Reed embarked on a long solo career, marked by alternating flashes of brilliance and gestures that seemed deliberate self-sabotage. DeCurtis faithfully chronicles all of them, with detailed information on recording sessions and Reed’s musical collaborators. He also gives illuminating background information, often drawn from Reed’s personal experiences, on what led to some of the compositions. Despite a flamboyant lifestyle in the gay culture of the day, Reed was an intensely private person, but the author has made every effort to interview those who knew him best. While his assessment of Reed’s importance seems slightly overblown, the book is a well-written, valuable document of a major figure in the American rock scene, putting a human face on a man who often seemed impossibly remote.

Essential reading for Reed fans and strongly recommended for anyone interested in rock as art.