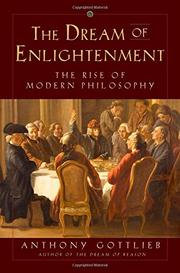 THE DREAM OF ENLIGHTENMENT

The Rise of Modern Philosophy

In this second volume of a planned trilogy on the history of philosophy, former Economist executive editor Gottlieb (The Dream of Reason: A History of Philosophy from the Greeks to the Renaissance, 2001, etc.) examines influential thinkers from the 1630s to the late 18th century, including Descartes, Hobbes, Spinoza, Locke, Leibniz, Hume, and two “unlikely bedfellows” buried opposite one another in the crypt of the Panthéon in Paris: Voltaire and Rousseau. Surprisingly to some, writes Gottlieb, “all these men were amateurs” who questioned the implications of new scientific and religious ideas for self and society. The well-born Descartes was “fascinated by machines and all kinds of mechanical contraptions.” Hobbes, “the most vilified thinker in Britain,” was an irascible man whose writings included “tirades against Aristotle and scholasticism” and attacks on academics and theologians. “Above all,” writes Gottlieb, “it was probably Hobbes’s materialism…that made him an anathema.” Like Descartes, Hobbes regarded nature as a machine, but he took the idea further, maintaining “that absolutely everything is physical.” Gottlieb sees much of Hobbes in the works of Locke and Hume, as well. Spinoza, excommunicated from the synagogue, “treated the Bible as a collection of documents that reveal as much about their authors as about anything else,” best examined “with the tools of a literary critic and historian.” Locke, according to Gottlieb, laid down the precepts of British empiricism, whose later exemplars included John Stuart Mill, Bertrand Russell, and A.J. Ayer. Pierre Bayle, a French philosophy professor, argued against religious superstitions such as the belief that comets were divine warnings, and his work focused on religious tolerance and “the so-called problem of evil.” Gottlieb reveals how his subjects were esteemed or derided by their contemporaries and also how their ideas filtered down to later generations. The Enlightenment, the author convincingly asserts, set the ground for toleration of religious dissent, scientific progress, and the dismantling of feudalism.