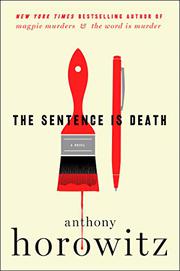 THE SENTENCE IS DEATH

Fired Scotland Yard detective Daniel Hawthorne bursts onto the scene of his unwilling collaborator and amanuensis, screenwriter/novelist Anthony, who seems to share all Horowitz’s (Forever and a Day, 2018, etc.) credentials, to tell him that the game’s afoot again.

The victim whose death requires Hawthorne’s attention this time is divorce attorney Richard Pryce, bashed to death in the comfort of his home with a wine bottle. The pricey vintage was a gift from Pryce’s client, well-to-do property developer Adrian Lockwood, on the occasion of his divorce from noted author Akira Anno, who reportedly celebrated in a restaurant only a few days ago by pouring a glass of wine over the head of her husband’s lawyer. Clearly she’s too good a suspect to be true, and she’s soon dislodged from the top spot by the news that Gregory Taylor, who’d long ago survived a cave-exploring accident together with Pryce that left their schoolmate Charles Richardson dead, has been struck and killed by a train at King’s Cross Station. What’s the significance of the number “182” painted on the crime scene’s wall and of the words (“What are you doing here? It’s a bit late”) with which Pryce greeted his murderer? The frustrated narrator (The Word Is Murder, 2018) can barely muster the energy to reflect on these clues because he’s so preoccupied with fending off the rudeness of Hawthorne, who pulls a long face if his sidekick says boo to the suspects they interview, and the more-than-rudeness of the Met’s DI Cara Grunshaw, who threatens Hawthorne with grievous bodily harm if he doesn’t pass on every scrap of intelligence he digs up. Readers are warned that the narrator’s fondest hope—“I like to be in control of my books”—will be trampled and that the Sherlock-ian solution he laboriously works out is only the first of many.

Perhaps too much ingenuity for its own good. But except for Jeffery Deaver and Sophie Hannah, no one currently working the field has anywhere near this much ingenuity to burn.