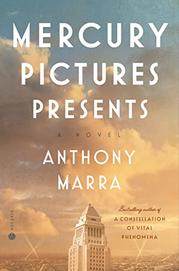 An ambitious young Italian woman makes her way among the émigrés of 1930s and ’40s Hollywood.

Maria Lagana has come to Los Angeles after her father is sentenced to confino—internal exile—for his anti-fascist advocacy in Mussolini’s Italy. Living with her mother in the Italian American neighborhood of Lincoln Heights—also home to a trio of no-nonsense great-aunts forever dressed in black—Maria finds work as a typist at Mercury Pictures International, working in the office of studio head Artie Feldman, a fast-talking showman with a collection of toupées for every occasion. In time, the letters from her father stop, and Maria becomes an associate producer, Artie’s trusted right hand, as well as the secret lover of Eddie Lu, a Chinese American actor relegated to roles as Japanese villains. When a young Italian immigrant turns up at her door introducing himself as Vincent Cortese, Maria’s past—and the mystery of what happened to her father—crashes into her present. Like the author’s earlier novels, the award-winning A Constellation of Vital Phenomena (2013) and The Tsar of Love and Techno (2015), this one builds a discrete world and shows how its denizens are shaped—often warped—by circumstance. But the Hollywood setting feels overfamiliar and the characters curiously uninvolving. While the prose frequently sings, there are also ripely overwritten passages: At a party, the “thunking heels of lindy-hopping couples dimpled the boozy air”; fireworks are described as a “molten asterisk in the heavens to which the body on the ground is a footnote.”

The World War II Hollywood setting is colorful, but it’s just a B picture.