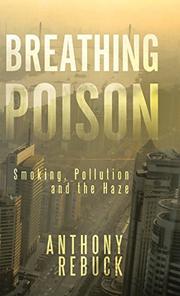 An investigation into the state of lung health in Asia.

Rebuck’s debut delineates the effects of dirty air on human lungs, starting with the pathologies of simple coughs and common asthma. He then connects the rising rates of chronic obstructive pulmonary disease in Asia to three primary culprits: smoking, pollution and toxic haze from fires. Of these, he focuses primarily on the well-documented habit of smoking, from which it’s easiest to draw correlations. The book presents facts that may surprise those who live in relatively smoke-free environments; for example, an estimated two-thirds of men in China smoke, and in Indonesia, rates are similar. The Asia-Pacific region’s smoking statistics correlate with high rates of COPD, which Rebuck says are underestimated in official literature as affecting around 56.6 million people. Worldwide, about 6 in every 100 people develops COPD, so Rebuck posits that the rate in India and China alone should be closer to 120 million sufferers. Better numbers, he argues, might help governments and doctors better cope with the scope of the disease. He then compares different medical interventions and their consequences, ending with a chapter that draw parallels between the epidemiology of lung disease and Type 2 diabetes—both progressive diseases with middle-age onset exacerbated by environment and lifestyle. Although this book is dense with medical terminology, certain chapters provide inventive analogies, comparing the expansion of alveoli in human lungs to the stretch of a Slinky, for example, rather than that of a balloon. It also offers black-and-white photographs of medical equipment, graphs of disease rates and measurement techniques for lung health, which give glimpses into the process of documenting and managing lung disease. However, despite Rebuck’s clear definitions of medical terms, his detailed explanations require readers to retain extensive terminology, which may confuse those outside the medical profession. A glossary or footnotes might have been helpful.

A prosaic but occasionally intriguing outline of a vastly underdocumented disease.

THE PEOPLE'S REPUBLIC OF CHEMICALS
by William J. Kelly
Nonfiction