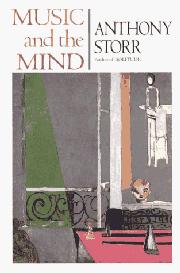 MUSIC AND THE MIND

From Oxford psychiatrist Storr (Churchill's Black Dog, 1989, etc.): a lucid and absorbing study of the relationship between music and the human experience. Storr's fluidly logical exploration begins with an assessment of various theories on the origins of music. After considering theories connecting music to natural phenomena like bird-song or linguistic features, Storr concludes that, although the origins of music will never be established conclusively, ``it seems probable that music developed from the prosodic exchanges between mother and infant which foster the bond between them.'' Using terms such as ``arousal,'' ``expectation.'' and ``fulfillment,'' later chapters explore physiological and psychological responses to music, bravely probing the issue of musical meaning as both an intellectual (objective) and emotional (subjective) stimulant. Occasionally, Storr's own musical observations are a bit simplistic: ``Bach's extraordinary skill maintains our interest; but it is an interest based on elaboration, symmetry, and rhythmic pulse, rather than upon progress.'' But this does not detract from the author's larger vision. The bibliography reveals an incredible breadth of erudition: Storr quotes widely and with equal comfort from scientific, philosophical, and literary sources, ancient to modern. Like Oliver Sacks, he leads his reader effortlessly through a capacious synthesis of diverse material without resorting to unnecessary technical jargon. Readers with their own inchoate reflections on the nature of music will be grateful to have Storr investigating and clarifying their experiences in such elegant, taut prose.