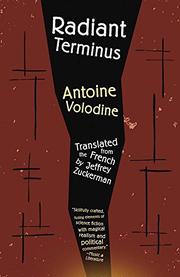 French “post-exoticist” Volodine (Bardo or Not Bardo, 2016, etc.) returns with a dark view of the near future, where science fiction meets a certain kind of horror.

It’s fitting that in Volodine’s latest, a corpse should figure as one of the first characters we meet—well, not quite a corpse, not yet, though 30-year-old Vassilissa Marachvili is passing on quickly enough that Volodine refers to her as “the dying woman.” Perhaps, as the post-Heideggerians would say, she is always already dead, but what does it matter? In the remote Siberian outpost that is the setting for Volodine’s yarn, a kind of Chernobyl on steroids in a post-apocalyptic time, following the fall of the Second Soviet Union in a nuclear shootout, the living envy the dead. But, that said, there’s not much distinction between the categories in this hell, a place of “machines constantly humming. Fuel rods regularly sizzling as they tried to get several degrees hotter….The radioactivity at its peak puffing almost silently.” Overseeing this domain is Solovyei, a kind of Col. Kurtz for our time (think Marlon Brando with even more of a glow), who certainly has a godlike complex and maybe even some godlike powers and who does what he can for Vassilissa: “She’s gone into a dark tunnel. She’s neither dead nor alive,” he explains, helpfully. That’s one of his easier-to-comprehend statements; as our hero, Kronauer, reflects, Solovyei is a master of conjuring “images of shadowy eternity and worlds with indecipherable rules of existence.” Indeed. There can be no Kurtz without a Marlow—or a Capt. Willard trying to terminate his command, though deposing a man half dead is easier said than done. Volodine himself is a master at painting grim, infernal scenarios that seem fit for a neoarctic retelling of Mad Max, and with just the right atmospheric touches: can there be, after all, a Russian story without its wolves?

A landmark of modern dystopianism, portending a time to come that no one would want to live in.