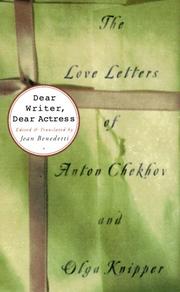 The Love Letters of Anton Chekhov and Olga Knipper

A moving and intimate epistolary record of the complex relationship between the great Russian playwright and the actress who eventually became his wife. Chekhov (18601904) already had an advanced case of tuberculosis when he met Knipper (18681959) in the fall of 1898. She was rehearsing the role of Arkadina in his revised version of The Seagull for the newly formed Moscow Art Theatre; the production's success—and her personal triumph in it—meant that she spent the theater season in Moscow while he, under doctor's orders, spent the long Russian winter in the warmer climate of Yalta. These separations, which continued after their marriage in 1901, made letters their primary form of communication for months at a time. The couple's very different personalities stand in sharp relief: Knipper's lively epistles, which feature evocative descriptions of the Russian landscape and some astute analysis of her lover's personality, reveal an affectionate, frank, impulsive woman who wrote what she thought and frequently expressed frustration with Chekhov's elusiveness. The playwright's missives are witty, charming, and infuriatingly oblique about his feelings, although his post-wedding correspondence is noticeably warmer. Benedetti (Stanislavski, 1988) has edited the letters to focus on the pair's personal relationship; frequent ellipses suggest that a good deal of information about Moscow Art Theatre rehearsals and internal politics has been omitted, possibly to avoid overlap with The Moscow Art Theatre Letters, which he also edited. Interesting though the couple's emotional ups and downs are, more material on their shared professional life—he wrote Masha in Three Sisters and Ranevskaya in The Cherry Orchard for her—would have made this even better. Nonetheless, this correspondence gives us wonderfully vivid self-portraits of two important Russian artists and a poignant chronicle of love struggling against the handicap of distance and the ravages of terminal illness.