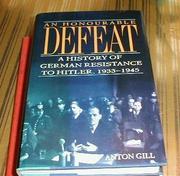 The Fight Against National Socialism in Germany, 1933-1945

A succinct, informative, and well-written history of attempts by Germans to kill or overthrow Hitler. Gill, an Anglo-German historian (A Dance Between Flames: Berlin Between the Wars, p. 192), focuses largely on the resistance network within the German ``establishment'': the Evangelical (Lutheran) Church, the Foreign Office, the Abwehr (German secret service), and, above all, the army. Focusing on the years 193844, he chronicles such key events as the coup d'Çtat planned by a group of officers at the time of the Munich crisis, a coup they would have implemented had Hitler gone to war instead of winning major concessions from British Prime Minister Neville Chamberlain. Such efforts culminated in the July 20, 1944, near-miss of a bomb assassination attempt against Hitler by Colonel Claus von Stauffenberg. It resulted in massive bloodletting against thousands of real and suspected conspirators, was widely denounced within the Third Reich, and was undervalued both abroad and in postwar West Germany, but a July 1944 New York Times editorial aptly called the bombing an ``honorable treason.'' In colorful prose, the author demonstrates how possible anti-Nazi uprisings and assassination attempts were repeatedly thwarted by the conspirators' dawdling and individual failures of nerve, by Allied (particularly British) indifference and mistrust of the conspirators, and by bad luck. He scants communist resistance, although he does delve into the White Rose and other German student groups. Unfortunately, Gill makes almost no mention of Germans who hid or otherwise aided Jews, political dissidents, or those threatened by the ``euthanasia'' campaign. Still, he skillfully uses German and English sources and provides a chart illustrating the resistance network and a ``Who's Who'' of anti-Hitler conspirators. Like the late Barbara Tuchman, Gill has deftly synthesized scholarly and more popular historical writing to produce an impressively accessible and interesting work. (Maps, 25 b&w photos, not seen)