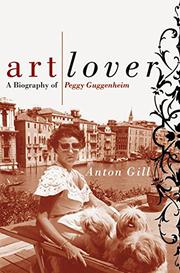 A Biography of Peggy Guggenheim

An inclusive account of the eventful life led by a driving influence in the world of modern art, by British playwright and historian Gill (An Honourable Defeat, 1994, etc.).

Born Marguerite, daughter of Benjamin and niece of the more famous Solomon R., Peggy Guggenheim (1898–1979) gained her first exposure to the world of the avant-garde as an unpaid clerk in her cousin Harold Loeb’s Sunwise Turn Bookshop in New York City. The 22-year-old took immediately to intellectual and artistic society; collagist and sculptor Laurence Vail, whom she married in 1922, was only one of the many artists in her collection of lovers. She blamed her promiscuity on Benjamin’s 1912 death aboard the Titanic, which left her “searching for a father,” but to his credit Gill refuses to take such remarks at face value. Instead, he weighs them against other testimony, noting that this “complex, anarchic, remarkable woman” was “not particularly introspective.” In Paris, Peggy soon found herself at the center of bohemian and expatriate society, forming durable friendships/love affairs with Samuel Beckett, Marcel Duchamp, Constantin Brancusi, and other notable avant-gardists. Moving on to London, she established Guggenheim Jeune in 1938, a gallery focused on contemporary art. On the eve of WWII, she accelerated her purchases, buying “a picture a day” and amassing one of the period’s most extensive private collections of modern art. Fleeing to New York with German surrealist (and future husband) Max Ernst, Peggy opened Art of This Century, which featured exhibitions by such then-unknowns as Robert Motherwell, Jackson Pollock, and Mark Rothko. She returned in 1948 to her beloved Venice; her 18th-century palazzo became the permanent site of the Peggy Guggenheim Collection upon her death. Gill makes a persuasive case for Guggenheim as a uniquely individual patron who single-handedly and single-mindedly helped determine art history’s course.

Serious but plenty juicy: a treat for both aficionados of modern art and readers of celebrity bios. (24 pages b&w photos, not seen)