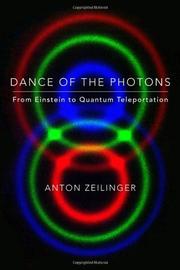 DANCE OF THE PHOTONS

From Einstein to Quantum Teleportation

A complex but ultimately rewarding exploration of the weird world of quantum physics, which describes the behavior of atomic and subatomic particles.

For example, light moves in both waves and particles, depending on the experiment. Quantum measurements can’t precisely locate a particle such as an electron, and a researcher can only give statistical odds that it’s in a particular spot (anywhere in the universe!). Einstein detested this idea, insisting that the description of light is wrong and that every electron is someplace. In his first book in English, Austrian physicist Zeilinger (Physics/Univ. of Vienna) defends the majority view: Quantum descriptions seem bizarre, but that’s the reality. Treading carefully, the author introduces two college freshmen, Bob and Alice, eager for a taste of quantum physics. Obligingly, their professor places each in distant rooms with a detector connected to a central source that emits light particles that trigger both detectors. Their assignment is to explain what’s happening—not a simple goal because each pair of photons is “entangled,” a quantum concept that means they are linked no matter how far they are separated. A change in one is instantly reflected in the other. Einstein dreamed up entanglement in 1935, explaining that it’s consistent with quantum laws but so absurd that it shows the theory’s defects. Amazingly, experiments proved that entanglement not only exists but has practical applications in computing, cryptography and even teleportation—of subatomic particles. Zeilinger uses simple diagrams and cheerful dialogues between Bob and Alice to make a difficult concept somewhat less difficult.

Not for the scientifically disinclined, but readers who pay close attention will grasp a strange but fascinating scientific principle.