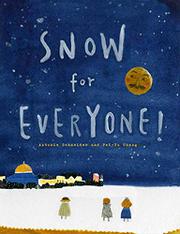 Three children argue about where the snow comes from and who it belongs to, learning that they can share and enjoy together.

One rare snowy day in Jerusalem, Samir, Mira, and Rafi are playing but fall to arguing over how to “divide up the precious snow.” They each decide to find out where it comes from and who owns it. Samir runs to the mosque to ask the imam; Mira goes to the church looking for the priest; and Rafi, to the synagogue to query the rabbi. Each child takes some snow with them only to discover when they reach their chosen authority that it has melted. The children’s squabble is clearly a metaphor for the conflicts that arise among the region’s different ethnic groups; Mira even draws a border. Schneider’s text mentions soldiers, traders, worshippers, pilgrims, and tourists but doesn’t delve into the region’s complexities. Using gold and blue tones, Chang portrays the many different people moving through the city and the clothes and carpets displayed in the market. An unattended, fedora-clad camel strikes an odd note. Controversially, the people appear to live in peaceful coexistence, but this is not an everyday reality in divided Jerusalem. The book does not supply context necessary for readers unfamiliar with the conflict to understand such details as Mira’s border or that a war over the territories has gone on for years.