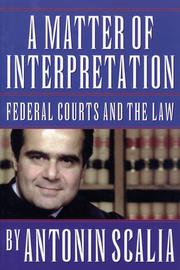 A MATTER OF INTERPRETATION

Federal Courts and the Law

Supreme Court Justice Scalia posits his views of how statutes and the Constitution should be interpreted; a noted historian and three distinguished legal scholars respond. Scalia, whom journalistic shorthand often renders the intellectual leader of the Court's right wing, sets forth the principles of what he calls ``textualism'' and others call ``original intent.'' To reduce a complex and subtle argument to a sentence, he believes that judges should discern a law's import from the words in which it is stated, not from divining the legislative intent behind its passage or interpreting the text through analysis of its historical context; he finds the application of common-law adjudicature to constitutional issues a threat to democracy. Apart from Mary Ann Glendon, who contributes a rather dry comparison of the techniques of statutory interpretation in European civil-law countries with those derived from our common-law traditions, the replies take exception to Scalia's method. Glendon's Harvard Law School colleague Laurence Tribe lauds Scalia's insistence on a close reading of statutory texts but contends that specific constitutional language must be studied ``in light of the Constitution as a whole and the history of its interpretation''; he doubts that any set of ``rules'' for constitutional exegesis is possible. Ronald Dworkin, of New York University Law School, finds textualism inadequate for constitutional analysis because ``key constitutional provisions, as a matter of their original meaning, set out abstract principles rather than concrete or dated rules.'' Brown University historian Gordon Wood disputes Scalia's contention that judges only recently began usurping authority from elected legislatures. Although all of the authors write clearly, it is unlikely that anyone not fairly well versed in constitutional law will fully grasp their arguments. A small but worthwhile addition to the literature.