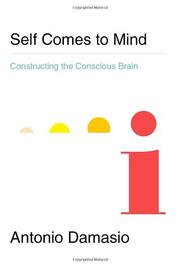 SELF COMES TO MIND

Damasio (Director/Univ. of Southern California Brain and Creativity Inst.; Looking for Spinoza: Joy, Sorrow, and the Feeling Brain, 2003, etc.) seeks to understand “the mystery of consciousness.”

“Consciousness is a state of mind in which there is knowledge of one’s own existence and of the existence of surroundings”—i.e., where the self introduces the property of subjectivity to the mix. The mind emerges as it composes patterns, “mapping” the world as it interacts with it, just as it maps its own processes. It will appropriate the sensory experiences and make them its own. “Ultimately consciousness allows us to perceive maps as images,” writes Damasio, “to manipulate those images, and to apply reasoning to them.” The author entertains the unconventional idea that mind processing begins at the brain-stem level, not in the cerebral cortex alone, and charts the interaction of the brain stem, the cerebral cortex and the thalamus, taking elementary mind processes through to imagination, reasoning and eventually language. He provides a well-rendered explanation for the role of consciousness in the natural selection of evolution by meeting an organism’s needs through orientation and organization. Along the way, Damasio confronts such slippery characters as feelings, emotions, the will to prevail, biological value and homeostasis, and he also looks carefully at neuroanatomical reference. Consciousness, in the author’s well-tempered and rangy explication, “resembles the execution of a symphony of Mahlerian proportions. But the marvel…is that the score and the conductor become reality only as life unfolds.” And its many players are responsible for everything from internal housekeeping to “placing the self in an evanescent here and now, between a thoroughly lived past and an anticipated future, perpetually buffeted between the spent yesterdays and the tomorrows that are nothing but possibilities.”

Awareness may be mostly mystery, but Damasio shapes its hints and glimmerings into an imaginative, informed narrative.