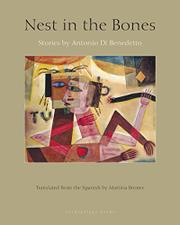 NEST IN THE BONES

Collection of stories by the newly rediscovered Argentinean writer Di Benedetto (1922-86), who blends the fantastic sensibilities of Borges and Kafka with the profound pessimism of Dostoyevsky.

A father, wealthy and disconnected, brings a palm tree to his estate and a monkey to go along with it. The monkey takes refuge in the tree and “only came down to scrounge or eat whatever food some kindly soul laid out at the foot of his dwelling.” The man’s son reckons that although he doesn’t have a palm tree to call his own, he is a monkey himself—and moreover, one who has made in the palm tree of his mind room for a whole flock of “blissful sparrows, canaries, and partridges.” So goes the title story, taken from Di Benedetto's first collection, Animal World, published in 1953. Later collections shed animal metaphors for more straightforward depictions of people who are unfailingly put upon, men and women who talk past one another in landscapes of “withered leaves gone brown, soon to rot,” who venture into the mosquito-infested jungle for no good reason except to satisfy the hunger of the inhabitants: “if those tiny beasts had a soul and their souls were inclined to vengeance,” thinks the adventurous journalist at the center of the beguiling story “Orthopterans,” from a collection published in 1983, “they will feed on me as soon as I fall still.” So they do. One of the most memorable stories here involves a Bartleby-like refusal on the part of an itinerant gaucho to take work that does not suit his dignity, an identification with the oppressed that explains why Di Benedetto should have run afoul of Argentina’s military junta in the 1970s—but that does not explain why his work should have been overlooked for so long, a gap this collection of short fiction helps remedy.

Di Benedetto’s view of the world is gloomy, his writing precise and poetic. It’s a winning combination.