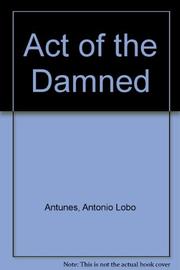 ACT OF THE DAMNED

A feverish chronicle of family disintegration rendered as an exhilarating cacophony of conflicting voices: the fourth novel from an award-winning Portuguese author to be translated into English (An Explanation of the Birds, 1991, etc.). Its action occurs seven years after a Communist revolution that confiscated the property of Lisbon's landed aristocracy and drove its possessors into exile in neighboring Spainand in the resentful remembrances of the members of a nameless family whom Louis-Ferdinand CÇline or Erskine Caldwell would be proud to have created (though in fact they're reminiscent of the cupidinous grotesques who populate the fiction of Spain's Nobel Prize-winner Camilo JosÇ Cela). The novel turns on the question of whether its senile patriarch's legendary wealth does still exist, oras some allegehas instead been ``all squandered away in casinos, whorehouses, hospitals and doctors for the two idiots''? But mongoloidism and retardation are only the most visible blemishes sported by a wolfish clan whose favorite pastimes include theft, adultery, rape, incest, murderous fantasizing (if not outright murder), and teaching parrots to shriek out obscenities. It's probably beside the point that Antunes's characters seem hysterically overdrawn; his mixtures of realistic narration, memory, and fantasy frequently impenetrable; and his condemnation of upper-class swinishness numbingly shrill. The novel is densely packed with surrealistically heightened detail and amusingly nasty figurative language (e.g., ``Her fingers climbed up his wrist the way crabs climb up rocks at low tide''). Antunes is not a subtle writerone imagines disco music throbbing and strobe lights winking while reading him. But for all this frenzied book's wretched excess, the fury of its rhetoric takes on all but irresistible momentum, dragging the reader, albeit kicking and screaming, into its lunatic orbit.