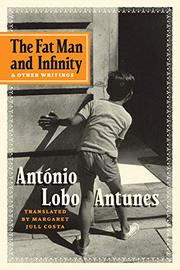 THE FAT MAN AND INFINITY

by António Lobo Antunes and translated by Margaret Jull Costa

Lively, wholly enjoyable memoir by prolific Portuguese novelist Antunes (What Can I Do When Everything’s on Fire?, 2008, etc.).

The author confesses to having an ideal reader in his grandmother, who, for complicated reasons, thought he was destined for a priestly, even archiepiscopal career and opened the money box whenever he produced an appropriately religious sonnet. But Antunes’s ambitions and interests would turn worldly. Early on, he confesses, he “would have preferred my identity card to bear a name like the Cisco Kid or Hopalong Cassidy,” Wild West figures that would in turn give way to other heroes. It would take him years to sort out what writers were and how they were supposed to act. In one irony-laden episode, he confesses his one-time belief that writers wore linen suits and ate ice-cream cones daily, whereupon he “started eating five bread rolls with cherry jam for breakfast every morning in the hope of growing a belly” and thus entered that sacred order. With brothers, a rascally uncle, pro goalkeepers and teachers alternately steering him straight, inspiring him and setting him to mischief, Antunes describes a sentimental education on the streets of Lisbon and a loss of innocence, on many levels, in faraway Angola, where he did service in the medical corps during the last days of the Salazar dictatorship and the Estado Novo. Antunes writes with a pleasing blend of realism and magic, similar to the Fellini of Amarcord and the Neruda of Confieso Que He Vivido.

An exemplary work of writerly autobiography.