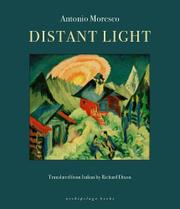 Living in an abandoned village in order to “disappear,” an unnamed man encounters a mysterious light across a deep ravine.

Italian author Moresco, in his English language debut, creates a ghostly landscape imbued with a gentle creepiness, in which the man’s “ears buzz in the total absence of sound” and yet furniture creaks, badgers rustle, and swallows screech and crunch on insects. Every object is alive and restless. The man marvels at plants sapping life from other plants and spores yet to “invent” themselves. Trees bend under the weight of chestnuts and the Earth itself shakes. Dwelling on the nature of “vegetal torment,” its perpetual birth and rebirth, Moresco’s story is slow to begin and slow to end, preferring a meditative quality, heaping questions upon questions, occasionally a beat longer than necessary. The story picks up with the man’s investigation of the distant light. A stranger shoveling manure posits the light’s source is alien, saying his goats ascended into a luminous, egg-shaped UFO. Instead, the man discovers a small boy living by himself in the woods, apparently self-sufficiently, and begins to visit him every few days. Their hesitant, budding relationship uncovers the pain of loneliness, the ephemerality of life, their insignificance in the universe—and the necessity of human connection. The story grows eerier as the man learns of the boy’s night school, his frustration at being unable to read, his exercise books full of nonsensical text. Their mutual loneliness and the dreamlike quality of their world begin to suggest a kind of purgatory. Though the ending is appropriately inscrutable, it is somewhat disappointing in its tampered uncertainty. Despite this muteness, the imagery and language glow throughout.

An unsettling and strangely tender novel.