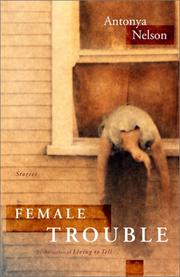 The snarky title suggests that some not-so-good situations may be coming up, and in more than a few of the tales, Nelson’s women try to revisit pasts that have disappeared and yet retain a strange resonance over their present lives. In “Incognito,” a girl from Wichita, with her high-school friends, lives a whole life of subterfuge. Easily duping their parents, they rent an apartment, shoplift, even go drinking with the local cops. Years later, the narrator moves back to Wichita and looks for her old gang. In “Palisades,” a young mother leaves her midlife-crisis husband in LA and comes with her baby to the New Mexico town she remembered visiting with her family as a child. There, she befriends a married couple—one a doctor, the other a psychologist—each having an affair unbeknownst to the other. While this setup has all the hallmarks of a poor piece of therapy fiction, Nelson keeps the pathos at bay and clearly delineates the lives and desires of three people trying to dig their way out of unhappy lives, quietly, so as not to upset anyone else. “The Other Daughter” revisits the same Kansas teenage wasteland that’s in “Incognito,” but this time inhabiting the skin of a bored, self-hating adolescent girl condemned to being ignored by her parents and jealous of her glamorous-seeming older sister, who has two boyfriends and does modeling for local stores. There’s a sweaty anger to its pages that gets under your skin in a way that many of Nelson’s stories don’t. Always exquisitely sculpted and unerringly precise, the worst you could say about this collection is that it occasionally holds its characters at a remove.