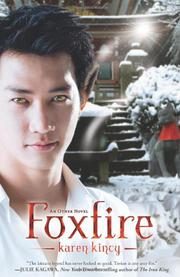 Kincy serves up this series entry blessedly free from the Other novels' usual heavy-handed racism metaphors, finally offering the characters a straightforward action-adventure.

Tavian, the romantic object of Other (2010), is returning to a Japan he hasn't seen since he was 6 years old. What should be a routine visit to the adoptive grandparents he's never met is haunted—literally—by a faceless ghost, a noppera-bo, that seems to be tailing him. Tavian is a kitsune, a fox shifter, and his accompanying girlfriend, Gwen, is half-pooka. There is much less bigotry against the shape-shifting Others in Tokyo than Tavian experienced in rural Washington, but there's plenty of other things to worry about. Shape-shifting gangsters keep trying to attack Tavian, for no obvious reason. Tavian fights a mysterious illness he was left with after his adventures in Other, and possibly only some kitsune shrine maidens can help. Everything seems to tie back to the mother who abandoned Tavian when he was just a child, an ignorant fox kit freezing in the woods. Tavian's need to know his past leads him on supernatural adventures around Tokyo, where he discovers satisfyingly predictable revelations.

An enjoyable, mystical coming-of-age, complete with quick getaways, motorcycle chases and no distraction from the already-established, comfortable romance. (Paranormal romance. 13-15)

OTHER
by Karen Kincy

THE NAME OF THE BLADE
by Zoë Marriott
Children