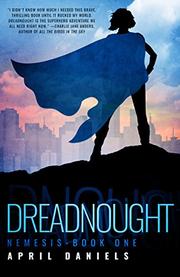 From the Nemesis series, volume 1

Danny's having a moment to herself when superfamous superhero Dreadnought drops out of the sky and dies in her arms—but not before passing her his powers.

The powers transform her body, so her girlhood—once a total secret—is now visually impossible to hide. Guilt and elation jostle for prime position in her head as she deals with getting her dream body and massive power she can't yet control. She's taken to meet Dreadnought's colleagues (some welcoming, some not) in the Legion Pacifica and gets some answers to burning questions. But when the supervillain that killed her predecessor shows her intentions to bring destruction on humanity, Danny has to make decisions she thought she'd have more time to work out. Daniels has captured the alternating bursts of confidence and vulnerability often present in 15-year-olds with mentally abusive fathers and unsupportive mothers; she threads it through a superhero story with a beautifully paced plot that has no problematic snags to interrupt the flow. There are men both disappointing and noble, but the women and girls—white trans girl Danny, Latina crime fighter Calamity, technician/scientist Doc Impossible (racially cued only with a long black braid), and cyborg supervillain Utopia—drive the story and the action. Mutual respect among the characters, crucially combined with Daniels' respect for them, ensures that none serve as mere props for our protagonist, and readers will hope they each get their own book in the coming series.

A thoroughly enjoyable, emotionally rich, action-packed story with the most exciting new superheroes in decades. Unmissable.