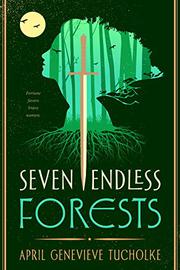 This stand-alone companion to Tucholke’s The Boneless Mercies (2018) reimagines the legend of King Arthur—with a twist.

Eighteen-year-old narrator Torvi and her 14-year-old sister, Morgunn, are the only survivors of the devastating plague that swept through their steading. Torvi especially aches for her mother and Viggo, the shepherd who captured her heart. The arrival of a druid named Gyda shatters their quiet existence: She claims to be on a quest for a magical sword and that Uther, the fearsome wolf-queen of the feral wolf-priests, can lead her to it. The sisters jump at the chance to join her. Torvi’s mother always told her that she was too softhearted and not destined for greatness, but Viggo insisted that she smelled of “dark forests, of gloomy caves, of exotic spices, of danger, of battle, of sacrifice, of hard-won victory.” When Morgunn is kidnapped by Uther and her pack, Torvi vows to rescue her. Joined by a band of wandering, knife-wielding artisans, they set out for the long journey, picking up new quests and allies along the way. Tucholke delivers exquisite worldbuilding and imaginative characters, and Torvi’s tale is packed with peril and no small amount of sacrifice—even a touch of romance. Her story also speaks to the joy found in spending time with loyal friends as well as the power and magic of storytelling. Readers won’t want this one to end. All characters seem to be white.