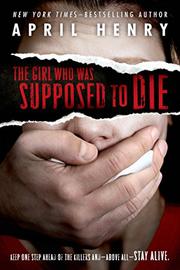 THE GIRL WHO WAS SUPPOSED TO DIE

The only thing Cady knows for sure is that someone wants to kill her.

“Take her out back and finish her off,” is one of the first things the 16-year-old hears when she comes to in an isolated cabin in the woods of Oregon. Suffering from amnesia, Cady doesn’t recall anything about her life, including where she’s from, who her family is or even the excruciating pain of having two fingernails torn off. But her body remembers enough martial arts to incapacitate her captor and escape. When she tries to contact the authorities, they believe she is an escaped patient from a local mental hospital. Is she an insane murderer, as news reports suggest? With no place to hide and everyone a potential liar (including herself), Cady races across the state, piecing together clues and scraps of memories, to try to figure out who she is in this thriller with nonstop twists and turns. Her only ally is Ty, a former homeless teen she meets at a brief fast-food stop. The possibility of biological warfare amps up the suspense, while short chapters and Cady’s direct, first-person narration make the Hollywood-blockbuster–like story pulsate. Although rushed, the ending stays true to the mood and consistent pacing of Cady’s plight. An adrenaline rush for reluctant readers. (Thriller. 14 & up)