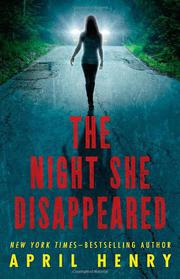 THE NIGHT SHE DISAPPEARED

When a popular high-school girl disappears while delivering pizza at her part-time job, her two fellow employees and classmates try to figure out what happened.

Drew Lyle takes the call, Kayla Cutler delivers the pizza, but the man ordering it wants to know if the girl who drives the Mini Cooper—that’s Gabie Klug—will be the delivery girl. When Kayla doesn’t return, Drew calls the police and the mystery kicks in. Who was the man; what happened to Kayla; why did he ask about Gabie; and, as time begins to pass, is Kayla still alive? Neither Drew nor Gabie, who go to the same high school as Kayla but are work rather than social friends, knows anything, but they are determined to find out. The thriller is narrated using a collage technique. Interspersed with the kids’ and perpetrator’s first-person accounts are police reports, 911 transcripts, webpages, interviews, etc., which add interest and texture to what otherwise would be a straight genre tale. The police seem amazingly obtuse, Gabie’s belief that Kayla is alive is given no realistic, clue-based hook and the third quarter has some pacing problems. Still, Gabie and Drew’s budding relationship is believable, and it has a strong wingding climax followed by a feel-good ending.