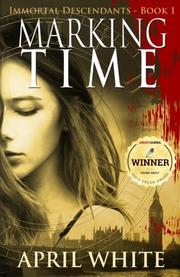 From the The Immortal Descendants series, volume 1

In this YA fantasy debut, a teen attends an exclusive boarding school where she learns that she’s from a superpowered lineage.

Seventeen-year-old Saira Elian and her mother live in Venice, California. Saira loves free-running at night and tagging the most hidden walls she can find. On a night when her mother has vanished—which seems to happen every two years—she visits her favorite secluded “art gallery” and admires a spiral graffito by an artist named Doran. Then someone calls out, naming her “Clocker.” She eludes him, but the police catch up with her. When they insist on reaching a family contact, the only person she can think of is Millicent Elian, the grandmother who lives in England. Saira flies to the dour family manor and finds herself locked in a bedroom. She escapes for some forest free-running only to discover someone pursuing her. When she reaches a car on the road for help, she again encounters the man calling her Clocker. She runs from the “reptilian voice” and hitches another ride to a train station. The rescuer—whom she’s named Wolf—tells her about a “Spiral at Whitechapel.” When she reaches Whitechapel station, she does indeed find a painted spiral, just like the one in Venice. Tracing her fingers across the lines, Saira feels, “Stretched and pulled, with a thrumming sound underneath my screams.” That she’s transported to Whitechapel in the year 1888 isn’t immediately apparent. Then again, White’s complex series opener isn’t your typical YA fantasy. Sure, St. Brigid’s boarding school is reminiscent of Hogwarts (and even Xavier’s School for Gifted Youngsters in the X-Men series), with teachers who specialize in arcane disciplines and transform into animals. But the thick pretzel of a plot involving Immortal lineages—Time, Nature, War, Fate, and Death—and their superpowered Descendants is fabulously unique. Best of all, the plot continuously rewards lovers of clever fantasy rules (like “if you try to travel within your own lifetime, the spiral will skip you back to a time before you were born”), and contains a seemingly endless cache of twists. A heartwarming finale allows characters and new relationships to blossom in further volumes.

A rich, satisfying mix of romance, horror, and time travel.