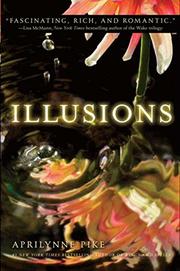 The third in this four-leaf series wilts at the outset, with prose more clichéd than its predecessors, but perks up in the second half.

Laurel’s back in her real-world hometown of Crescent City, Calif., trying to live a normal teenage life without pining for Avalon, her faerie homeland. Trolls are probably hunting her, but they don’t attack often, so Laurel’s biggest quandary in this installment is deciding between—chime in, paranormal romance fans!—the two dreamy boys who adore her. Steadfast David is human, while steamy Tamani is Lauren’s personal faerie guardian; they’re equally loyal and equally smitten. Daily life becomes precarious when Klea, a tough special-ops fighter who frequently saves Laurel’s life but emanates untrustworthiness, asks Laurel to befriend Yuki, an exchange student who’s obviously hiding things. As a plant (in this world, faeries are biologically plants), Laurel works with powders and beakers and pestles trying to determine Yuki’s secret—is Yuki a faerie too? Pike’s third-person narration uses Tamani’s perspective sometimes, conveniently showing readers scenes behind Laurel’s back. It’s unclear how Laurel and Tamani shift from knowing that Yuki and Klea’s motivations are unknown, to assuming they comprehend who Yuki and Klea really are (they have no evidence), but those unfounded assumptions underlie the climax’s surprise.