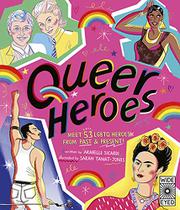 Fashion blogger Sicardi introduces readers to 52 queer heroes from around the world.

The book’s survey of diverse individuals should be applauded. Commendable ranges of ages, ethnicities, genders, professions, and time periods are covered. However, the book’s downfall begins with the sparseness of information offered about each subject. Each entry includes a name, a date range and birthplace, a few scant paragraphs, a stylized portrait, and nothing else. For example, while the joint entry on Sylvia Rivera and Marsha P. Johnson covers their friendship and work with homeless LGBTQIAP youth in New York City, it makes no mention of Rivera’s historic 1973 speech regarding homophobia and transphobia within the LGBTQIAP community. That was kind of a big deal. Likewise, David Bowie is praised for his music, but mention of his infamous 1983 Rolling Stone article, in which he identified as heterosexual, is absent. (In fairness, the title could refer to heroes of queer people.) The book’s other major deficit is its disorder. The subjects are arranged arbitrarily, without a table of contents or an index. There is no further reading section and no bibliographies for references. A haphazard two-page glossary exists (thankfully in alphabetical order), but that’s it. The book has some merit as a brief introduction to people readers may not have heard of but doesn’t have the follow-through necessary to lead them to further discoveries.