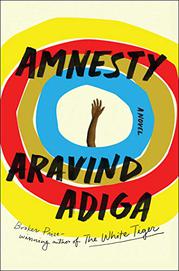 An undocumented immigrant from Sri Lanka tries to elude the forces, legal and otherwise, working to push him out of Australia.

Dhananjaya Rajaratnam, the hero of this taut, thrillerlike novel by the Booker Prize–winning Adiga (Selection Day, 2017, etc.), has done everything he can to pass through Sydney unnoticed after his student visa expires. He goes by Danny, the better to assimilate, and works as a housecleaner so fastidious and efficient he’s nicknamed Legendary Cleaner. He lives cheaply and unobtrusively in a storeroom above a grocery store and buys expensive hair highlights to blend into an increasingly expensive city. But during the course of the day the novel covers, his unstable perch is getting wobblier. His phone is obsolete and he can’t afford to replace it, cutting off his lifeline, and he witnesses the aftermath of what he’s sure is a murder committed by Dr. Prakash, one of his clients. The plot of the novel mainly turns on Prakash’s attempts to bully Danny into silence, lest he be reported to Australian immigration authorities. (“Easiest thing in the world, becoming invisible to White people, who don’t see you anyway; but the hardest thing is becoming invisible to brown people, who will see you no matter what.”) But Adiga cannily balances his assured plotting with a style that evokes Danny's justified paranoia. Amid the tick-tock of Danny’s reckoning with Prakash, Adiga chronicles his hero’s history as a migrant, which involves a demoralizing stint in a scammy university and an increasing realization that getting along means disclosing information others can use. “Each time a door opened or slammed…Danny’s heart contracted,” Adiga writes, and he expertly translates that anxiety to the reader.

A well-crafted tale of entrapment, alert to the risk of exploitation that follows immigrants in a new country.