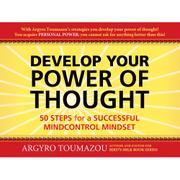 DEVELOP YOUR POWER OF THOUGHT

A self-help book directing readers to think positively and constructively.

Your thoughts are powerful, creative engines, according to the author: “Things that are happening to you do not happen by mere chance or accident. You cause them to happen.” Most of the time, our thoughts are dictated by what is happening in the external world we inhabit. Rather than reactive, the author would like people to be creative. Through a series of linked points, she takes readers through awareness to self-observation where you witness consciousness in action from a third-person perspective, to self-concentration where you focus on a single point without the constant clutter accrued by simple consciousness. This focus allows you to “create your reality,” through inner detachment from the veneer of life. Sow your mind with the seeds of your desires and needs; set and pursue that target. Keep your mental attitude in check, which in turn steadies your response to the external world. Uproot negative thoughts and plant positive ones. Repeat after Toumazou: “I have the ability to think whatever thoughts I desire,” thus fashioning your relationship to the world. This may sound delusional to some, though from a slightly different perspective it could, for example, be seen as the awareness to avoid victimization. Be decisive, own the right of expectation, act accordingly and practice persistence (yes, there will be difficulties and obstacles to attaining aspirations). Toumazou is in the business of creating good habits, though occasionally she drifts. The world isn’t so mechanistic as she suggests with: “we can create our external reality,” nor is it as immaterial as it seems in her giddy statement: “you are a holograph connected to the universe.” She is ultimately a proponent of positive awareness. (The influence of Charles Haanel’s The Master Key System is made clear from the epigrammatic references appended to nearly each of Toumazou’s 50 steps.) If the book’s message feels relentless, that’s because it is. Thinking positively—thinking constructively—isn’t a cakewalk, but it sure beats glum defeatism.