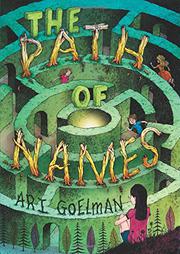 THE PATH OF NAMES

Thirteen-year-old math and magic geek Dahlia reluctantly agrees to three weeks at a Jewish summer camp. There, the ghosts of two little girls visit her, and she begins to dream of David Schank, a young yeshiva student in New York in the 1930s. Soon, she realizes his spirit has possessed her; he is an ibur who needs her help to complete a task he began when alive. The novel alternates between David’s story, in which he first discovers and then fails to hide from the Illuminated Ones the 72nd name of God, and Dahlia’s, as she attempts to figure out what the ghosts and the spirit want and why the creepy caretaker won’t let any children into the camp’s overgrown hedge maze. A substantial cast of characters, multiple plot twists in both narrative storylines, some subplots that go nowhere, a golem, gematria or Jewish numerology, the cabala and more make this novel a challenging read. It’s certainly a refreshing change from the usual focus in middle-grade Jewish fiction on the Holocaust, immigrants and bar/bat mitzvahs, and the inclusion of a girl protagonist who loves math is also welcome.

Despite its potential, though, it’s likely that the book will have limited appeal.